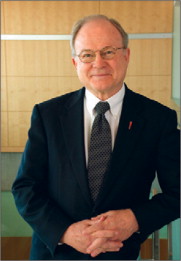 I-TECH’s founding principal investigator Dr King Holmes has been awarded the Gairdner Foundation’s 2013 Global Health Award for his scientific contributions to the field of sexually transmitted diseases. Holmes holds the William H. Foege Endowed Chair in Global Health at the UW Department of Global Health, where I-TECH is based, and has led I-TECH since its inception.

The award  recognizes “a scientist whose research has made, or has the potential to make, a significant impact on health in the developing world.”  The Foundation notes that “King has spent 45 years researching sexually transmitted diseases. His work has led to many diagnostic tests and therapies for treating and preventing numerous infections, including human papilloma virus, gonorrhea, chlamydia and genital herpes.”

Announcing the award in an e-mail to the UW School of Public Health, Dean Howard Frumkin wrote, “King has been a force of nature here at UW, as a longtime leader in the School of Medicine, and more recently as Chair of Global Health—a leader in education, in research, and in program-building, a mentor and role model to many, a true gentleman,  and a friend.   Please join me in congratulating him on this signal, and richly deserved, honor.”

Read more in The Lancet’s coverage of the announcement, and the Gairdner Foundation’s announcement.