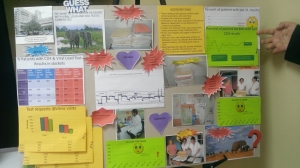 A JaQIC team’s storyboard illustrates inspiration points and accomplishments on the journey toward quality improvement. Storyboards are a creative way for teams to learn from one another.

Despite strong clinical capacity, systemic barriers may prevent local care teams from executing CD4 count and HIV viral load tests. These tests are critical for monitoring the health of people living with HIV — and their response to antiretroviral therapy (ART).

In response to this challenge, in October 2013, ten treatment sites from the four Regional Health Authorities kicked off the Jamaica Quality Improvement Collaborative, or JaQIC (Ja-quick).

The collaborative is led by the International Training and Education Center for Health (I-TECH), in partnership with the Caribbean HIV/AIDS Regional Training Network (CHART), and supported by the U.S. President’s Emergency Plan for AIDS Relief (PEPFAR) through the U.S. Health Resources and Services Administration (HRSA).

“The aim of the project was to significantly increase CD4 and viral load testing by March 2014, and it succeeded in that in all ten sites,” said Bluemer-Miroite, noting that within six months, JaQIC was seeing measurable results. (In fact, from baseline to March 2014, sites improved incidence of CD4 testing by up to 34 percentage points.)

“But,” she added, “the collaborative has achieved so much more than that.”

Working Together to Improve Quality

Building on the existing investment in training and capacity development, quality improvement collaboratives such as JaQIC empower frontline health care workers to implement best practices and improve quality of care.

They also rely on the knowledge of existing clinical care teams, who are most familiar with health systems challenges and best positioned to identify solutions to resolve them. These challenges run the gamut from the availability of patient forms, to problems with transport of samples, to equipment failures during sample processing.

Through the collaborative, sites identify potential problems that can crop up at each step in the process, test these ideas via plan-do-study-act (PDSA) cycles, and share learning. As JaQIC teams gathered during a series of Learning Sessions to “share seamlessly, steal shamelessly,” they not only improved the quality of care, they also built excitement for quality improvement and demonstrated that frontline staff can make impactful changes.

“Programs struggle with obtaining the data to prove that they are having an impact,” said Bluemer-Miroite. “Through the collaborative, tracking data became particularly meaningful to the health care teams – because they were the ones who were using the data. By tracking patient-level data from the outset, it’s easy to see how the quality of care is being affected, and it increases the data quality, too.”

The success of the program has led to the buy-in of the Jamaican Ministry of Health (MOH) – so much so that the MOH has added the role of QI Coach to its Treatment, Care and Support Officers (TCSOs), and all of the collaborative’s activities will fully transition to the MOH in December.

The collaborative has also spread to four additional countries in the Caribbean (CaReQIC): Trinidad and Tobago, Barbados, the Bahamas, and Suriname, which have joined a new group from Jamaica to form CaReQIC. While gearing up for CaReQIC Learning Sessions, coordinators realized that more foot soldiers would be needed to liaise with the sites directly, so I-TECH helped to develop training for a cadre of QI Coaches in all five countries.

The effects of this program will be far-reaching, even after its transition.

“What’s really exciting about JaQIC is its potential for a sustained impact on multiple levels,” said Dr. Behrens. “JaQIC has dramatically increased rates of CD4 and viral load testing via systemic changes that are likely to persist into the future. More importantly, however, JaQIC has introduced a ‘culture’ of quality improvement in the region that has been enthusiastically adopted across a broad spectrum of local and regional stakeholders.”